“The Immortal Life of Henrietta Lacks” by Rebecca Skloot 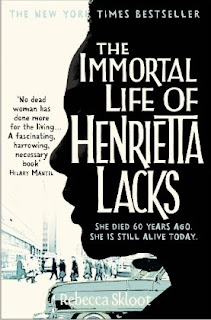 When people talk about the extraordinary contributions made to science, names like Darwin, Einstein or Crick and Watson would probably be the first to pop in to your head. Few people have even heard of Henrietta Lacks (indeed many might be more familiar with her imposed pseudonym, Helen Lane) but her contribution to cell biology is, I think it is fair to say, immeasurable. This book is somewhat of a eulogy to her.

Henrietta Lacks was a poor African-American tobacco farmer who died of cervical cancer in 1951 at the age of 31. Unbeknown to her or her family, a small sample of her tumour was removed and given to George Gey at the tissue culture lab at Johns Hopkins. Her tumour was the first whose cells could be kept replicating indefinitely in the lab and was the beginning of cell culture. Most people are probably more familiar with the cell line derived from her tumour, HeLa cells, than the story behind the person.

"An Orchard Invisible – a natural history of seeds" by Jonathan Silvertown

The title for this book is something of a misnomer. Certainly it covers what the title leads you to expect but there is much more within so don’t be misled. I found useful material in the book relating to many parts of the curriculum at all stages:- Extended Science, first year modules such as Biodiversity and Molecular and Cellular Biology; second year modules such as Ecology and Organism:Environment Interactions; through to third year modules such as Speciation and Diversity and Plant Exploitation are all covered.

On the whole, unlike Frogs, Flies and Dandelions, the examples contained within are not in the common parlance of our lecturers so the book feels like a new look at the subjects. Examples are
All-in-all it’s a useful read that demonstrates that pulling biology apart into separate disciplines can mask the way that processes going on at molecular level impact on an ecosystem. My only small criticism of the book is that its editing is clunky – I don’t like the way that on the bottom of one page “sci-“ appears and you have to turn over the page to see ”ence” and know that you’ve read “science”. It strikes me as a pointless attempt to save space and interferes with the read.

"Frogs Flies and Dandelions: the making of species" by Menno Schilthuizen 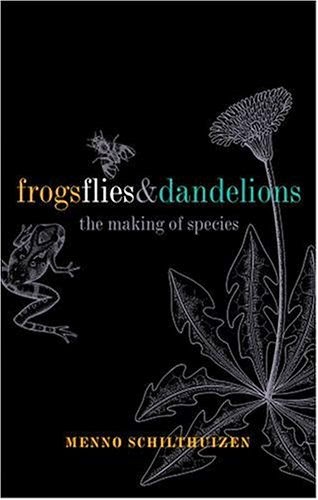 
"Frogs, Flies and Dandelions" is a thought-provoking read in many senses. It covers allopatric and sympatric speciation in detail, clarifying the different ways that species diverge from one another. Many of the examples quoted are ones we've come across before in lectures (chiclids, sticklebacks etc), both in Biodiversity in the first year and in Ecology in the second year but there are many other examples used in the book that reveal the difficulties in identifying how and why speciation occurs. The writing is straight-forward and while sources are clearly quoted, their use is not cumbersome and intrusive in the way that they often are in scientific papers and some other books. In fact, overall the use of vernacular works well, helping to keep the text accessible. Let's face it, when you see a section titled "wondrous willies" it makes you want to read on!

This is a book about Siamese twins, people with extra digits, cyclops, dwarves, hermaphrodites, giants, and a pig with two faces. It was accompanied by a Channel 4 documentary when first published. Already you might have formed some impression of this book, but you might be surprised to learn it is a sensitive book that doesn’t treat its subject matter like carnival freaks—though many of the characters in the book were in carnivals. Instead, the book deals with dignity with its themes to show how important mutations are for all of us. In Leroi’s words, “We are all mutants. But some of us are more mutant than others.” In fact, you probably have about 100 mutations that were not given to you by your parents. But which ones did you get?